Let’s start understanding the connection between SIRT1 and Resveratrol by first understanding another gene,Resveratrol Supplements are not created equal - It all comes down to their capacity to affect positive gene expression... SIR2.

SIR2 is a gene that enhances the lifespan when it is activated and and when its extra copies are made. Analogues and orthlogues of the SIR2 gene are present in all living organisms, including humans. In humans, the SIR2 gene ortholog is known as SIRT1.

The first experiment that proved SIR2 enhanced lifespan was performed on yeast. Scientists discovered that when an extra 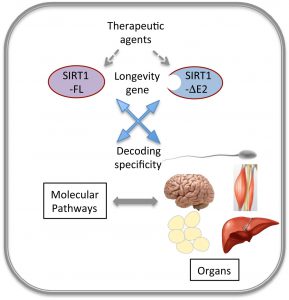 SIR2 gene was added to a yeast cell, it repressed the formation of rDNA circles and helped extend the yeast's lifespan by 30%. The experiment was also performed on roundworms and the result was just as positive.

The discovery surprised many scientists and research into SIR2 soon intensified. It was found that SIR2 worked by reducing homologous recombination in DNA. It did this by removing acetyl groups from proteins. It was concluded that when activated, SIR2 helps in the creation of error-free DNA, which in turn leads to an enhanced lifespan.

The SIR2 equivalent in humans is called SIRT1. The SIRT1 gene encodes a protein, sirt1, which works more efficiently and has wider de-acetylating effects than anything contained in SIR2. Activated sirt1 protein can help improve metabolism, and beneficial apoptosis. An increase in sirt1 protein levels in mice helped their cells survive longer than would normally be the case. Otherwise, it is known that all cells live for a certain amount of time which seems to be genetically programmed. It was also discovered that increased levels of sirt1 also helped repair damaged cells.

Resveratrol Supplements Work via Manipulating the SIRT 1 gene within the body...So, how is eating fewer calories connected to sirt1? Well, eating fewer calories activates sirt1, which then works by creating perfect DNA, repairing cells, and fighting off other serious and not-so-serious medical conditions.

This is where resveratrol came in.

Resveratrol, as you may know, is a compound that is produced naturally by plants to fight off pathogens and environmental stress. Scientists have discovered that resveratrol directly activates SIR2 and its offsprings (which are collectively referred to as sirtuins) in yeast, short-lived fish, mice, rats and even primates (lemurs). Research on humans is still ongoing, but it seems likely resveratrol does activate sirtuins in humans as well.

Many scientists feel that a day may come when it is discovered that resveratrol can in fact control the SIR2 enzyme and it is a matter of time before such a discovery is announced. Studies on a few species have revealed that when given resveratrol, these species not just live longer, they also live a healthier, mostly-disease-free life. This is the connection between resveratrol and SIRT1, sirt1 and sirtuins.

Finally, here’s one “real world” example of how resveratrol helps. The French diet is packed with loads of fat. Yet, they lead a healthy and long life, on average. Do you know why? Because they drink gallons of red wine in their lifetime and red wine contains the good old sirt1-stirrer, resveratrol. Cheers.